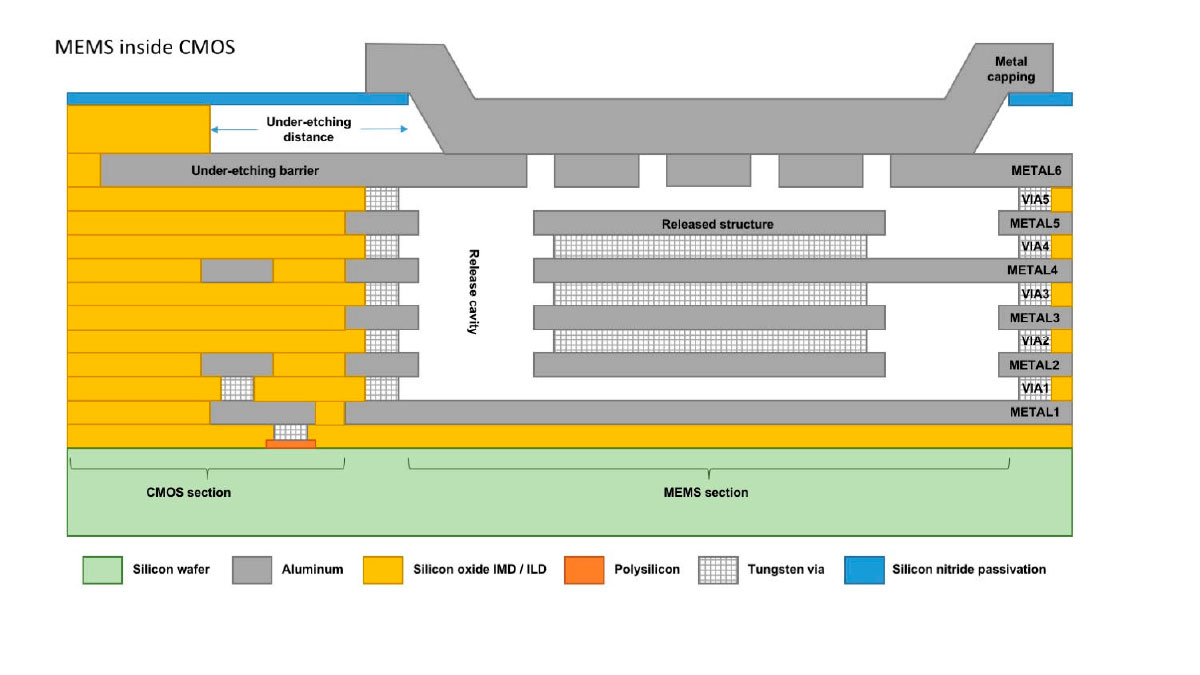 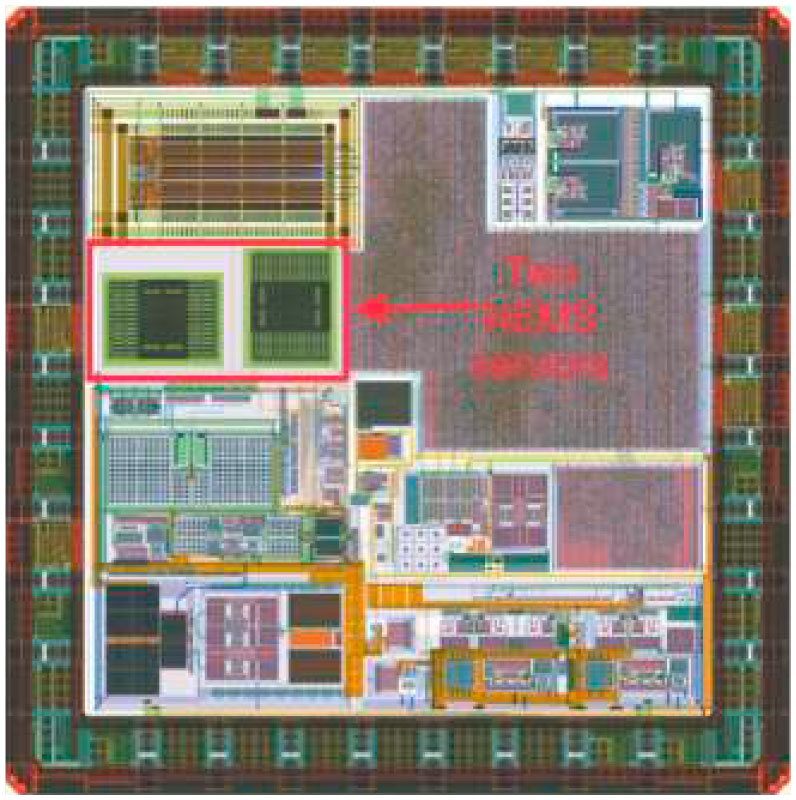 A typical MEMS sensor package needs two chips – one with the MEMS structure built on it and the second with the control electronics, resulting in a package of 4mm3.

Our equivalent NEMS sensor package has everything on one chip and is only 1mm3 so we free up 3mm3 for every sensor that we replace with one of ours. For example, three sensors replaced frees up 9mm3 and needs less PCB real estate and support components. This valuable space can be used for additional batteries, more sensors or extra features.

Additional NEMS sensor structures can be added to the same chip with hardly any increase in size. In the example shown of two motion sensor structures, they only take up about 10% of the chip. Additional sensor structures would be similar in size and most of the control electronics is shared, hence a multi-sensor solution is only slightly larger.

NO-ONE ELSE CAN MAKE SENSORS AS SMALL AS WE DO

We have invested over fifteen years and more than fourteen million Euros in Research and Development to perfect our unique approach of building NEMS structures within the CMOS layers. We create them from metal layers using standard CMOS techniques and then etching away the appropriate silicon dioxide areas to form a cavity so that they can move freely. They are made at the same time as the control electronics beside them to form a one chip solution, all made using standard CMOS processes.

CMOS was never designed for this and the released metal structures suffer from stress and distort. We have solved this with unique structure designs that we have created for the various sensor types that we do. We are protecting these designs with comprehensive patents to secure our position as the only company with NEMS-within-CMOS. Please see Technology for more details.

MEMS sensors provide the vital interface between the real world and electronic devices. They are in almost every electronic device that needs awareness to make them smarter – from computers to cars and from phone to earbuds. Our disruptive technology will revolutionise this multi-billion-dollar sensor market by removing the barrier to high volume production as we can use any CMOS fab. Also, unlike current MEMS, we can enjoy the cost-saving benefits of CMOS shrinking to smaller nodes.

NANUSENS CAN DRAMATICALLY INCREASE THE MEMS MARKET AND OWN THAT SHARE

The reason that IoT has not really taken off is because, currently, MEMS are not cheap enough and not small enough. Plus, because every MEMS product needs its own special production process, there are no economies of scale and it is hard to ramp up the numbers that can be produced, except by creating a duplicate production line.

We can make our NEMS in any of the big semiconductors facilities (fabs) so there is no limit to how many we can produce, plus we have the economies of scale provided by these fabs. As a result, IoT will finally take off with our unlimited supply of inexpensive, nanoscale sensors taking the MEMS market from billions to trillions.

Nanusens is a VC-funded, UK-based company that specialises in creating nanosensors inside CMOS. Its expertise and pending patents place it as the uncontested leader in this technology that will revolutionise the next generation of sensors.

“If MEMS isn’t small enough for you then NEMS should be,” says Stuart Robinson, Director, Handset Component Technologies service at Strategy Analytics. “Nanusens has taken MEMS technology to the next smaller level, developing nanoscale sensors inside the CMOS that can be integrated in the same silicon as the sensor controller. This is not a big deal for some applications but it’s a game-changer for small devices that have multiple sensors such as accelerometers, gyroscopes, pressure and humidity sensors. Space-saving sensors leaves more room for other components such as a bigger battery. Every cubic millimetre counts in some devices so Nanusens is onto a winner here.”

Simon Forrest, Principal Technology Analyst, Futuresource Consulting, said in the 2019 Futuresource Hearables Market Report – Worldwide: “Space is always at a premium within hearables; similarly so is battery life.  Adding more sensors to create “smart “ hearable products is therefore challenging. The answer may come from advances in MEMS manufacturing. European start-up, Nanusens, have developed methods to create MEMS sensors within standardized CMOS manufacturing processes. This enables sensors to be placed on the same silicon as the control logic, making them up to ten times smaller and freeing space for other components or larger batteries.”

“Nanusens is working with Bluetooth earbud suppliers to add smart wake-up, tap, and double-tap functions by integrating their chips,” said Manuel Tagliavini, principal analyst of MEMS at IHS Markit. “In general, reductions in power usage and smaller sensors sizes will benefit the earbud market and Nanusens’ thin package aligned to this trend.”

NEWS RELEASE Paignton, UK – 23 September 2022. The multi-award-winning pioneer of nanosensors, Nanusens, has appointed Dr Graham Hine as Chairman. He has over 25 […]

NEWS RELEASE Paignton, UK – 24 October 2022. The multi-award-winning pioneer of nanosensors, Nanusens, has announced that it is patenting a solution to the problem […]

Nanusens granted first patent with more in the pipeline

NEWS RELEASE Paignton, UK – 7 October 2022. The multi-award-winning pioneer of nanosensors, Nanusens, has had its first patent granted in the US, with filings […]

Job Openings at Nanusens – June 2021  We are expanding our team at our HQ located at the EPIC centre in Paignton, in the beautiful […]

Nanusens shortlisted for major award and receives funding for expansion

Torbay, UK – 15 March 2021. Recently joined member of the Torbay EPIC Centre, Nanusens has been shortlisted for a major award and just received […]

Nanusens shortlisted for an award!

We are delighted that Nanusens has been shortlisted for yet another award. The list of nominees for the prestigious Elektra Awards 2020 has just been […]

Nanusens looks to £10m Series A round

Nanusens is a Finalist in 3 Categories in 2019 Elektras

MEMS in CMOS: an impossible dream?